These are words I’ve come to expect during this time of unfavorable circumstances. Some of the worst words you could ever imagine have finished this sentence in the last few months. But none shook me to my core or made me weep quite as hard as the ones I heard from Fed Ex on a snowy Monday morning.

“Unfortunately Ms. Rodriguez, someone threw your package away”

I black out a bit after I hear this. A burning heat starting in my cheeks spreads rapidly to every part of my body and my mouth starts lubricating itself like it does right before you puke. The unthinkable has happened: My wig, which was handmade for me and costs twice as much as my rent, has been thrown away by a Fed Ex employee.

Maybe I should remind you that I have just completely removed all the hair from my head. I’ll also add that I was at the salon that very minute for my appointment to get the wig cut to precision. And to top it off, I was scheduled to shoot a guest spot on a television show that day. Cue uncontrollable sobbing.

Let me go back.

I previously posted about my hair buying journey and the tedious work that was about to go into making my gorgeous handmade wig. I had flown to New York before the wig was completed so Maurice went to the local Fed Ex in LA and shipped it directly to Mala’s on a Friday for a Saturday delivery. I had zero anxieties about this plan at all. This sort of thing happens every day! What could go wrong? Around 3pm Saturday, the wig still hadn’t arrived so I called Fed Ex to inquire about the package. They said it never left the store, despite the fact that I had a receipt proving I had paid for it to be delivered the next day. After checking with the store in LA, they told me the package wasn’t at the store either and that we would have to wait until Monday for them to review the security tapes and see what happened. But there was a snowstorm coming to the city so we all still held out hope that it was on it’s way and just didn’t get recorded in all the chaos of storm preparation. In the spirit of this wildly misguided optimism, we scheduled the “haircut” Monday morning to get me looking as good as new for this shoot.

Now it’s Monday. I’m waiting patiently for either a call from the manager or a knock on the salon door from a shivering delivery man, whichever comes first. The call comes first. “Unfortunately Ms. Rodriguez…” Apparently they had footage on the tapes of an employee chucking my wig in the trash. Why someone would do this is a question that still rattles around in my balding head. There seems to be no other reason that to add to the absurdity of my life. So I let the tears go, crying for everything all at once. Fortunately, just as the heaves were diminishing into whimpers, I got a call from the TV show saying they were postponing the shoot due to weather. Ok, we can remove that from the list of concerns. So all that was left was to tackle my chrome dome dilemma with laser focus: I needed some wigs and I needed them fast.

Peter and I trudged through the rapidly accumulating snow to a wig store on 14th street. They have everything from expensive human hair wigs to purple afros and 40 inch cosplay options. I spent about an hour trying on as many as I wanted, eyeing the new woman I became with each flick of the wrist. I settled on three: a short, a long and a rebellious. The awesome part was they were all human hair but none of them was more than $60.  $170 total and I could style them at will. Don’t try this with synthetics! You’ll have melted hair confetti on your hands. SO here’s where the fashion starts coming into play. Just like an article of clothing always looks better when it’s been tailored to you, a wig that is customized, no matter what it looked like at first, can do wonders. I marched right back to Mala and this is what we came up with. (Side note: until I can learn the ins and outs of this blog template, just click on the photos to make them bigger. Computer dummy over here.) 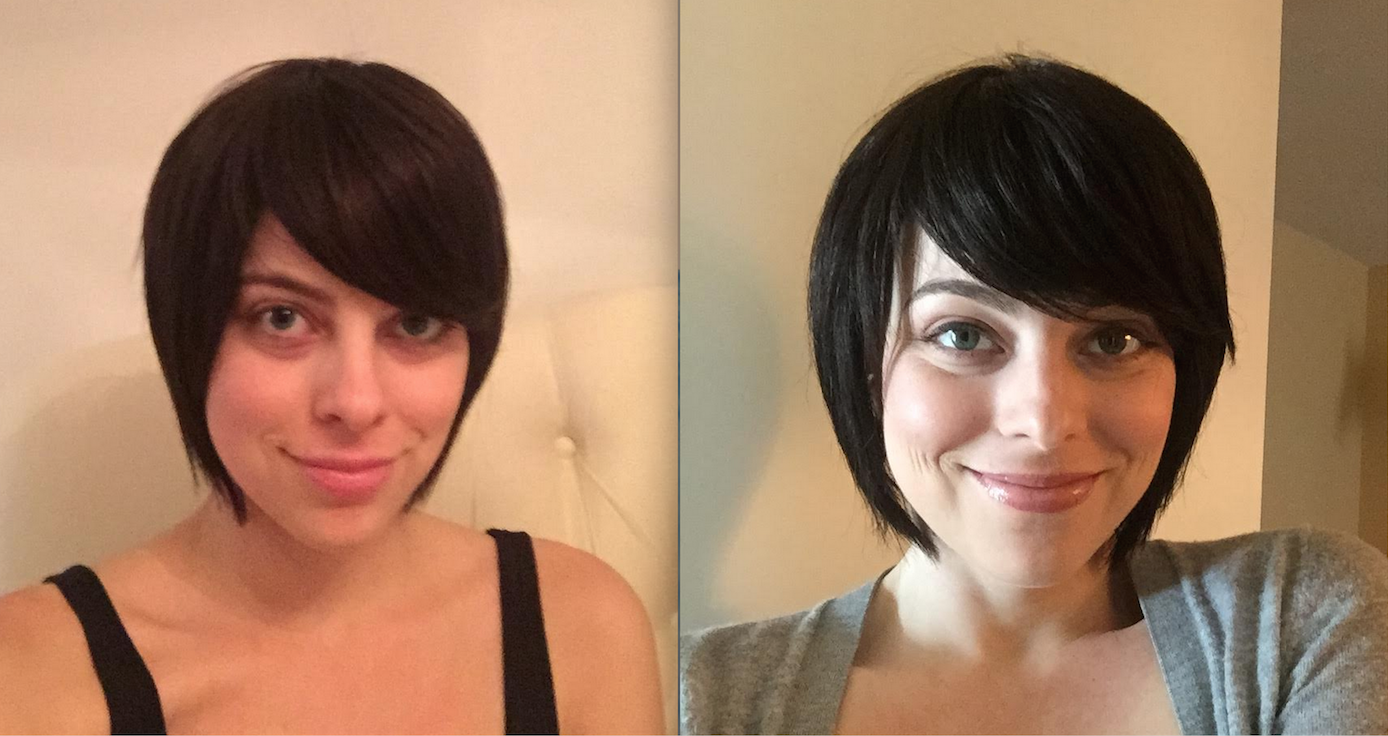 This is my “regular Krysta” look. I actually couldn’t believe how ready-to-wear it was without even touching it. We just added some dimension and texture so it could have some freer movement at it was good to go. 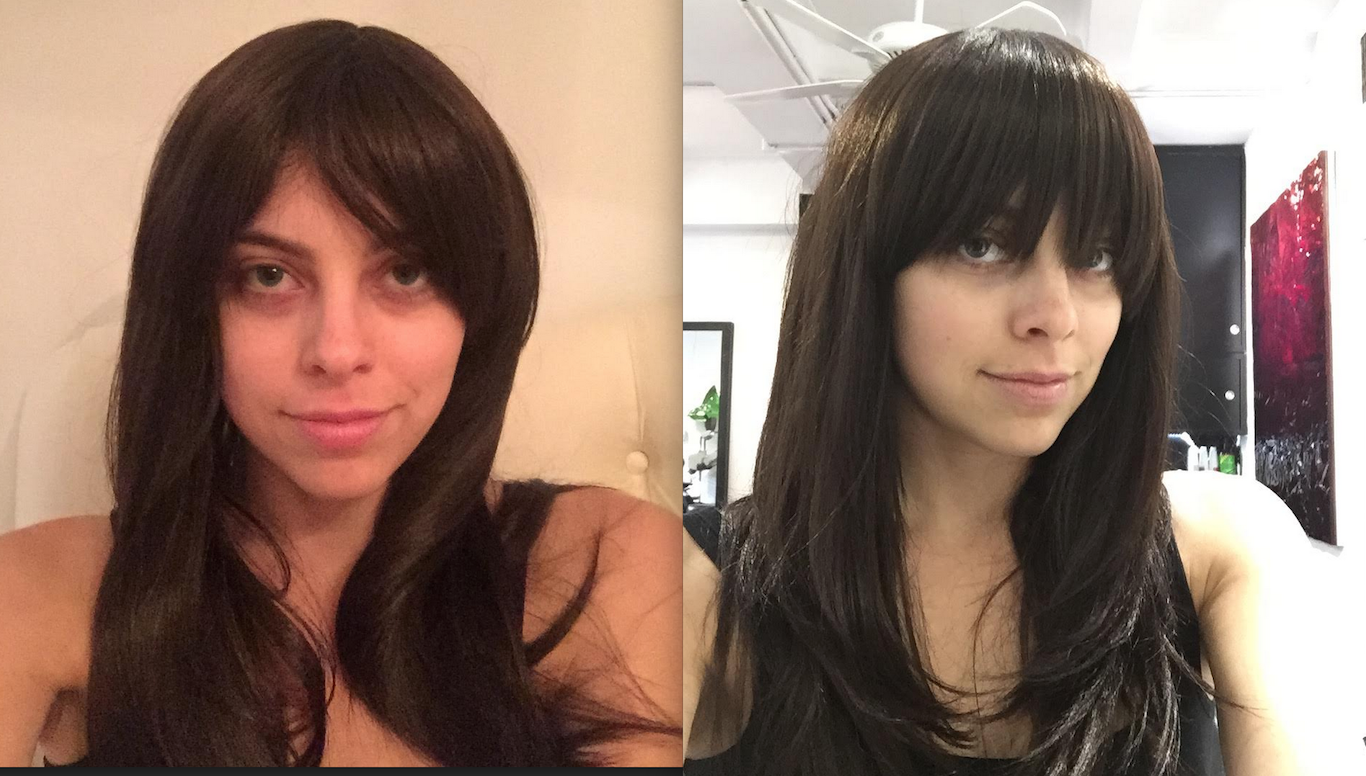 This was really fun. I haven’t had long hair since I was 9 so this was a great way to experiment. When I put the original one on I felt like a Yale student in the early 70s. Not exactly what I was going for! We cut some super sassy bangs, got rid of a ton of bulk and layered the heck out of it. Now I’m like an assassin school student….in the early 70s. 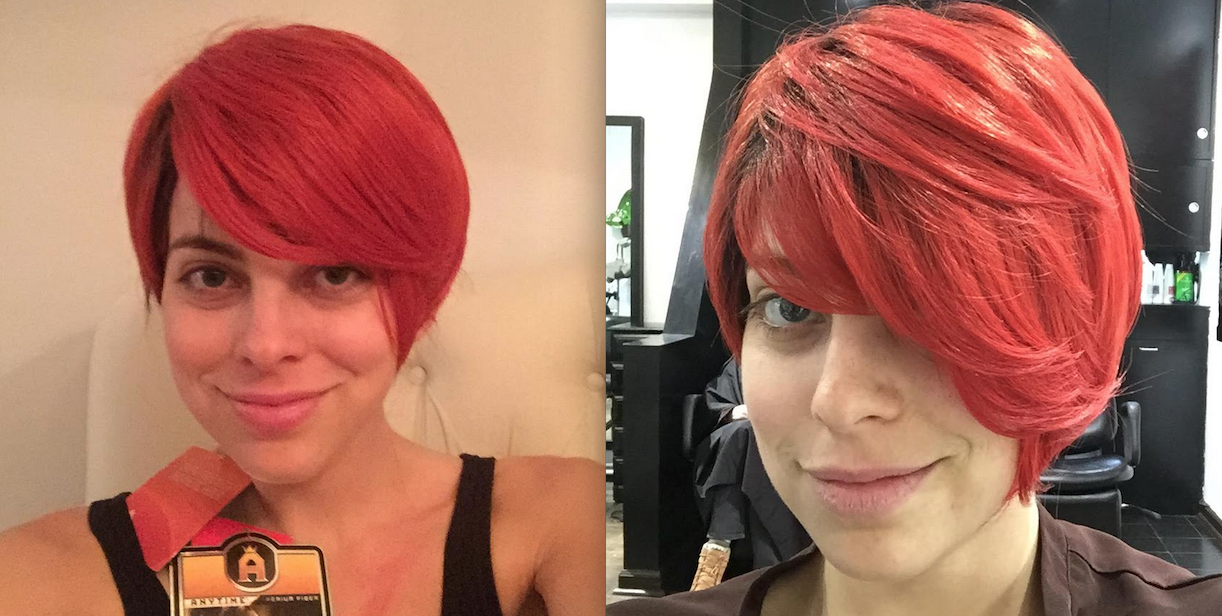 My superhero wig! This was a treat I gave myself after the crappy day I had. I saw it up on the top shelf and immediately fell in love. It was already fun and spunky but Mala turned up the sass factor by cuting the coolest swoopy layers. It even has dark roots built in which cracks me up. Its my favorite of the three and I can’t wait to take this cherry red beauty for a test drive.

I finished up the day with a smile while the Fed Ex debacle faded slowly into just another ridiculous story. To their credit, Fed Ex swiftly reimbursed me and Maurice is back in his magic workshop starting from scratch one more time. Plus, I have three new ways to walk around life in. All in all, not a bad day. Fortunately Ms. Rodriguez, you’re gonna make it after all.