I swear, this may be the most surreal my life will ever get. 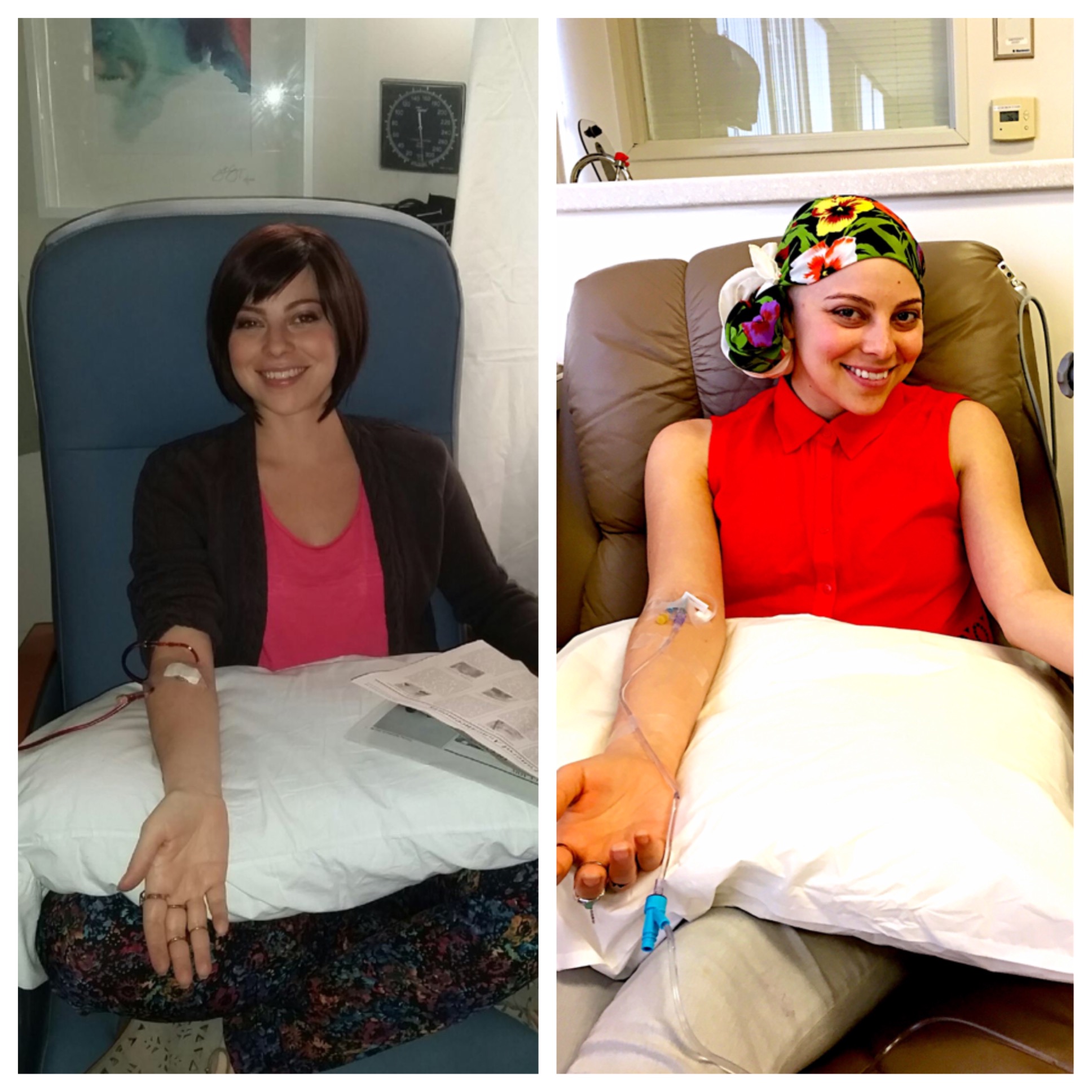 The photo on the left was taken on Wednesday, on set at my new guest stint on television.

The photo on the right was taken the next day at my real chemo session.

For those of you who don’t know, I recently started work on the ABC Family show “Chasing Life” which follows the topsy turvy world of a young woman diagnosed with cancer. I’m playing the role of Vanessa, a tough, straight-talking cancer patient who drops some truth bombs in the transfusion room. It’s been such a fun and emotionally invigorating experience to incorporate my real life into my character and a total joy to work the with cast and crew.

This particular day I showed up at my call time and had a wardrobe fitting for some comfy pj’s that would be realistic to what someone would wear to a treatment center. Of course, the designers found some with a little style and edge, just how I like to do it at my own sessions, and it’s always a treat when you can show up to work and put on sweats. I then headed over to hair/makeup where I finally got to don my second-times-a-charm-no-thanks-to-fed-ex wig! Isn’t she pretty?? She’s going to get her own post dedicated to her for all she’s been through so stay tuned on that. For the show, an incredible hairstylist Garry Allyn treated my little beauty to a spa day, washing and blow drying her with care. Here’s the kicker: Garry is also a cancer survivor! We gabbed forever about our experiences, swapped stories about the devastation and the unexpected joys we had, even talked about potential tattoo ideas. There is truly nothing like being able to converse with someone who knows the terrain of this odd little patch of life, especially one who is thriving on the other side.

Getting my makeup done on this show is such a funny experience to me. While the other stunning actresses are in the chair, they are gradually getting shed of their glamour to portray cancer patients accurately. Hair is covered, lips are paled, and everything is dialed down. Since my character is new to treatments and I am decidedly not, my process included putting hair ON, adding fake eyelashes and rouging my cheeks to give the appearance of someone at the start of her journey. So if you’re keeping track, I have gotten to put on pajamas and get pampered with beauty products while yucking it up with new friends. Best job ever? I’m thinking so.

Once it was time to shoot my scene, I cozied up in my big leather arm charm with the fluffy white pillow that goes on your lap and allowed someone to tape a fake IV tube to my arm. Oh how I wish this was the real way those things got attached! I loathe, ABHOR even, getting the IV put in my arm at chemo. Still, after everything I’ve been through with treatments, the worst part about cancer is the needles. The veins stop cooperating and I’m left dizzy and bruised while each nurse searches for a spot. “Just a little prick,” they always say, right before the deep pain jumps through my sensitive arm crook. Prick is definitely the word I would use to describe that grubby needle. A stupid, nasty prick.

But I digress. I had a wonderful time shooting the scenes and “acting” like I had cancer for a change. In the script, my character sheds some perspective to April (the lovely Italia Ricci) which makes her change the way she looks at some aspects of her life. It felt great to work again and have a nice distraction from what I knew was coming just a day later: Treatment #5

I rolled out of bed with no stylist picking out my sporty chemo clothes. It was all up to me now. I wanted to feel bright and springy since we have officially crossed over the threshold of this egregious winter and I wanted to celebrate that. A pair of light stretchy jeans, a bold red fringed top and a floral scarf made me feel like I was bringing a little sun inside. I had fun twisting the end of the scarf into a floret of sorts, adding a simple flair that made me smile.

I opted out of makeup for my real life scene as chemo receiver. After having put so much on my face the day before, I wanted to give my weary face a rest, especially my little champions: my eyebrows. These little nuggets have been holding down the fort this whole time and they deserve a parade. I spread some Brian Joseph’s lash and brow conditioning on them and headed out.

To seal the deal, my Chemo-rella fantasy officially turned back into a pumpkin when that damn needle came out. I laughed and joked my way through it, even showing the nurse my pictures from the day before and suggesting the fake tape idea in the future. Can’t hurt to ask right? But as soon as I felt that familiar sting it was official. I was no longer acting.

The last thing that brought my two days into sync is the conversations I had with the people around me in treatment. A marked shift has occurred in my attitude since I’ve been going in for chemo. In my first entry about treatments, I described feeling like the rookie in the room while the more experienced patients were rolling their eyes at my naivete. I am definitely not a novice anymore. As it turns out, I’m grateful for the experience I’m amassing. Despite the fact that I typically feel uncomfortable talking to strangers, I find myself striking up conversations with other people around me. I started a lovely exchange with an older woman who was starting her first treatment that day. I wanted to give her as much information as possible, as much encouragement as she needed and any anecdotes that might ease some of her anxiety. Just like my T.V. alter ego, I felt like I had some knowledge to share that could set someone on the right path. To be clear, I’m not under any assumptions that my opinion is worth anything or needs to be followed (especially since I don’t have the skilled writers to formulate my well crafted speeches like I did on set). But I’m trying to open up as much as I can. If I can share what I know here, or on T.V., I feel like I would have done my job.